skip to main | skip to sidebar

I've been a bit ill the last few days, some flu type thing, so I wouldn't mind having somebody or something to cuddle. I have nothing here. I'm also a big kid and still love toys, so here are some palaeo themed toys and cuddly stuff I would love to have. This is a Yowie toy, whatever one of those is (something to do with Cadburys). They released a Dickinsonia model as part of their Lost Kingdoms range. I want one, even though it is labelled as a 'Giant Disc Jelly' and is clearly meant to be some sort of worm or jellyfish (some crown group) and seems to have the wrong symmetry (many Ediacarans have glide symmetry). Interesting choice of colours too. I never expected to see such a toy, so I want it.

They did others too, including Mawsonites, which strikes me as an odd choice:

There's also this cool Devonian trilobite toy, and I want this one as well, a Wiwaxiid: 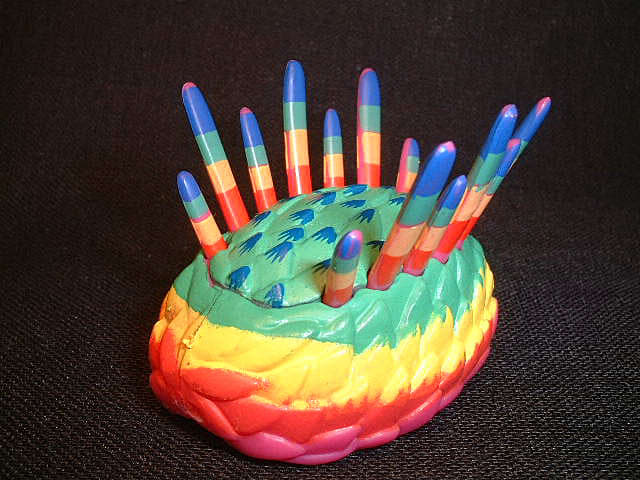 
Whilst searching for those Yowie toys, I found these cool models, which I know nothing about:

I would love a Kimberella model, especially as it is one of my favourite Ediacaran forms. A Charniodiscus would also be cool:

And so I am not stuck in the Ediacaran, here is Pterygotus, a eurypterid:


All of these are taken from a single website and some can be bought here: http://www.etsy.com/shop/PaleoGirlCrafts Another Wiwaxia, one which I would love to have in my bed. Plus the awesome artist custom makes them in different colours: There's also the fearsome Cambrian predator Anomalocaris, though it looks very cute and cuddly here. Again, I want one!


Trilobites and eurypterids are quite common, I particularly like this mini trilobite: Their loving creator even makes keyring sized ones and I can't decide which I prefer:


These can all be viewed here, along with a large variety which goes beyond the invertebrates here and even includes scarves: http://paleogirl.deviantart.com/gallery/?offset=0


This next bunch I actually came across a while ago whilst researching nudibranchs (sea slugs) as Weird Bug Lady makes cuddly nudibranchs, such as the one below, as well as many cuddly extinct organisms too.

And these cuddly Ediacarans (Tribrachidium?) are only around £20 (hint hint): The shop for these can be found here: http://www.etsy.com/shop/weirdbuglady?page=1
Check out her Flickr as well, as I round off this blog post simply by posting some of my favourites (as links, due to the way Flickr works): http://www.flickr.com/photos/weirdbuglady/

I'd never seen this image before, until today. It is by Gerald Scarfe, the artist known for the album artwork of The Wall by Pink Floyd. In case you can't tell, it is Margaret Thatcher. Thanks to this image, he has just had a pterosaur named after him, Cuspicephalus scarfi, the paper describing it is currently in press.

I'm from what used to be an old mining village and my grandparents worked dahn't'pit. Naturally Maggie Thatcher is loathed in my area and even though John Major was prime minister when I was at junior school (I think) we still sang a song about Thatcher, which involved drawing on the hands and went something like this:

Posted by The Palaeobabbler at 20:52 No comments: Links to this post

I came across this image on Facebook recently and found it very amusing, despite the fact that I have been paying no attention to anything with "we are the 1%" mentioned.

One of the good things about this image is how true it is, regardless of the political climate. Such beautiful diversity exists out there, yet we tend to focus on those which are cute and cuddly, especially in conservation. This could be a good platform for a rant, but I am rather under the weather right now and want to talk about something else.

I've been on Facebook discussion boards for around four years now. In that time I have developed a lot of my views, shared them with others, helped people learn and refine their own views and had a good laugh, making many online friends (some of which I have met and intend to meet in real life). I found that I most enjoyed discussing evolution on those boards, which were Christian boards, making me one of the few theistic evolutionists able to engage in the science and willing to engage in the theology. There are others out there, but they generally are not so outspoken. I tended to stick to a single discussion board, occasionally branching out into others, but always returning to my main group, where I often built a bit of a reputation (generally good). Every so often I would migrate to a new board and find lots of creationists to debate with, but before long they would all disappear or keep quiet (I can't claim I didn't have a hand in that, but I can't claim I did either). Only the last group I was on seemed to have a steady influx of outspoken creationists.

Facebook has now removed those discussion boards. This looks to be the end of my time on those boards and is perhaps a good point in life to get away from them (it is rumoured they might return). It is a shame though, as I did enjoy it. It also means a lot of my old discussions are no longer archived and I can't pick up where I left off with people with whom I was discussing. Sometimes it got in the way of my life, causing me to neglect people, and, naturally, housework. I've wasted many useful hours on those boards, so I should be saying "good riddance," but I will mostly miss it. No other format appeals to me, though I do like blogging every so often.

So, goodbye Facebook discussions, it has been an interesting ride!
Posted by The Palaeobabbler at 20:10 2 comments: Links to this post

For those of you who don't know, Hollyoaks is a British soap opera aimed mostly at teenagers, known for constantly having beautiful women (and apparently men). In the last few months there has been a serial killer storyline and it has been dragged on ridiculously. Still, I wanted to see how it turned out. I hadn't watched it at all last week, when the story reached its climax, so I've just watched four episodes online in my on time (despite a temperamental internet connection). So there, I admit it, I occasionally watch Hollyoaks.

I wouldn't normally admit to such things so publically, but I spotted something in the background which interested me: 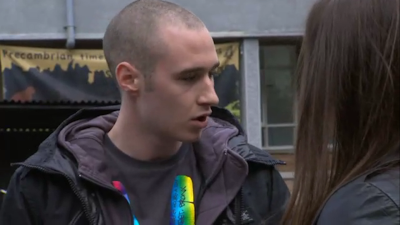 Did you see it? It says "Precambrian times" on the banner in the background. If I remember correctly, it also says "the lophotrochozoa" though I am not sure why. The Precambrian loving geek in me could not help but hit print screen. I'll go to bed and reflect on my sad life now...
Posted by The Palaeobabbler at 01:55 No comments: Links to this post

Yep, you read correctly. There is a rap guide to evolution, enjoy:


Posted by The Palaeobabbler at 23:53 No comments: Links to this post

A rant about discussion boards...

Facebook recently announced that they were shutting down discussion boards, though it seems to have not happened. When the deadline was looming I reflected back on my many years on those boards and how I was perceived. At first I was not very active, mostly observing, but before long I gained respect and even appeared to be intimidating to some. In recent months the respect seemed to decline and instead I am simply known as an argumentative know-it-all. I am clearly argumentative, or else I would not be on a discussion board, but if they met me in person those views might change, as I am shy and reserved.

What really stuck in my mind, and prompted this post, is the "know-it-all" accusation. Many have noted that I show confidence in the things I present, that I rarely if ever state that I don't know or that I might be wrong, and people find this surprising, a negative character trait even. I only wish they would read my blog! On discussion boards I mostly end up discussing the basics of evolution, those things which are beyond reasonable doubt in the scientific community, things which I have been studying for several years now. Why would I be anything other than confident in that situation? Why would I say that I don't know, when we are talking about the basics, about things I do know? I have often acknowledged that I could be wrong about evolution, but that the chances are so slim that it is not worth thinking about.

When we get into more complex aspects of evolution (try reading Darwinian Populations and Natural Selection by Peter Godfrey Smith) then my certainty steadily diminishes, I openly acknowledge that I might be wrong or that I don't know. On this blog I believe I have stated openly that I do not know whether contingency or convergence is the dominant trend in long term evolution, so I am critical of both Gould and Conway Morris. But really, anyone who has read my posts on Ediacarans should know that I prefer topics where I lack all of the knowledge, but sadly nobody on a Bible discussion board wants to talk about Ediacarans.

Ediacarans are a group where people have good ideas concerning what they are, but nobody really knows. They constantly defy classification. The small shelly fossils, which I am working on for my dissertation, are similar in this sense, though many of them can be classified. I am intending to make my career saying "we don't know, but let's try our best". That's what many palaeontologists, many scientists in any field, do. In fact, that's how science really works. Saying "I don't know" is a big part of science, as long as it motivates one to find out. So the know-it-all accusation is really unsupported, they just need to broach a subject which is not so simple and beyond doubt.

If you ever engage in such discussions, try doing what I do and stick to what you know, stick to your strengths. Mine are evolutionary biology, palaeontology, geology and theology of nature. But in sticking to those topics which favour your interests/qualifications, you risk being dismissed as an arrogant know-it-all.
Posted by The Palaeobabbler at 18:27 No comments: Links to this post